In April 2014 the Federation Equestre Internationale (FEI) released a White Paper describing years of study of the effect of various horse footings on the health of horses competing in the FEI sports and regular racing. The full document can be downloaded from the FEI. The following is a brief summary of the FEI's findings about jumping horses and footing.

Elite show show jumpers hit the ground with extreme forces and use tremendous force to take off. Less experienced jumping horses were sometimes found to land with even more extreme forces than highly experienced jumpers. The footing for elite show jumpers needs to be able to deal with these forces. Show jumpers competing on hard surfaces were noted to be likely to suffer from sore front feet. Injuries to the superficial distal front tendon were common in jumpers. 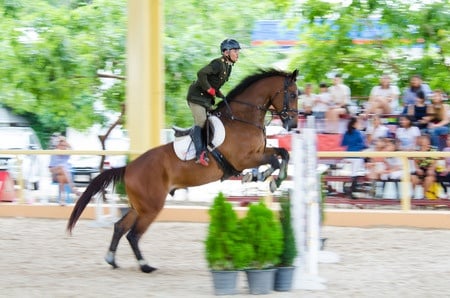 The ideal footing for show jumpers needs to not only be able to absorb the tremendous shock of landing, but also have high shear strength, respond to high strain rates, and remain consistent from horse to horse throughout the course of a day's competition. This paragon of surfaces was not identified. The authors noted that most footing materials varied in performance as the temperature changed and the amount of moisture changed, making comparisons across materials difficult.

The authors of the white paper noted that it is widely believed in some equestrian circles that a surface ideal for high performance will also be a surface that is likely to cause injury. The idea behind this belief seems to be that a very stiff surface will allow the horse to push off well (increase performance) but will not absorb shock, therefore causing trauma. The authors noted that this belief has not been found to be true in human sports, where high-performance surfaces are also found to be low-injury surfaces. The authors note that an absence of a link between high-performance surfaces and high-injury surfaces needs to be demonstrated in horse sports.

Training on one type of surface and then competing on a very different surface was found to increase the risk of injury. Even slight alterations in the surface were noted to change the horses' movement patterns. Inconsistent surfaces were also found to increase the risk of injury and also reduce performance, perhaps by reducing the horse's confidence. Consistency throughout a day's competition was difficult to achieve. All footing materials tested compacted and became harder throughout the day.

Rubber-woodchip surfaces were noted to be likely to suffer from surface inconsistencies that could cause injuries. Adding fiber to sand was found to be very beneficial to the properties of the resulting surface. Wax coatings applied to sand surfaces were found to dramatically reduce the injury and lameness rate as compared to uncoated sand or woodchip surfaces.

The paper concludes with calls for more studies and collection of more information. Methods for measuring the important mechanical properties of surfaces are described, and sensors that can be fitted to horses to measure the impact of footing on the horse are described. Detailed epidemiology data collection is also needed to explore links between surfaces worked on and acute/chronic injuries.

If you have any questions about equestrian footing or arenas, don't hesitate to contact us.